A fascinating read on what would have happened if we had not had and used the atomic bombs on Japan.
Deep in the recesses of the National Archives in Washington, D.C., hidden for nearly four decades lie thousands of pages of yellowing and dusty documents stamped “Top Secret”. These documents, now declassified, are the plans for Operation Downfall, the invasion of Japan during World War II.

Only a few Americans in 1945 were aware of the elaborate plans that had been prepared for the Allied Invasion of the Japanese home islands. Even fewer today are aware of the defenses the Japanese had prepared to counter the invasion had it been launched. Operation Downfall was finalized during the spring and summer of 1945. It called for two massive military undertakings to be carried out in succession and aimed at the heart of the Japanese Empire. Japan map 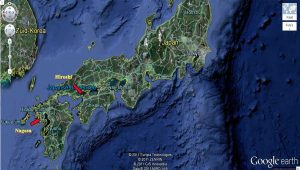 In the first invasion – code named “Operation Olympic”- American combat troops would land on Japan by amphibious assault during the early morning hours of November 1, 1945 – 61 years ago. Fourteen combat divisions of soldiers and Marines would land on heavily fortified and defended Kyushu, the southernmost of the Japanese home islands, after an unprecedented naval and aerial bombardment. The second invasion on March 1, 1946 – code named “Operation Coronet” – would send at least 22 divisions against 1 million Japanese defenders on the main island of Honshu and the Tokyo Plain. Its goal: the unconditional surrender of Japan.With the exception of a part of the British Pacific Fleet, Operation Downfall was to be a strictly American operation. It called for using the entire Marine Corps, the entire Pacific Navy, elements of the 7th Army Air Force, the 8 Air Force (recently redeployed from Europe), 10th Air Force and the American Far Eastern Air Force. More than 1.5 million combat soldiers, with 3 million more in support or more than 40% of all servicemen still in uniform in 1945 – would be directly involved in the two amphibious assaults. Casualties were expected to be extremely heavy.

Admiral William Leahy estimated that there would be more than 250,000 Americans killed or wounded on Kyushu alone. General Charles Willoughby, chief of intelligence for General Douglas MacArthur, the Supreme Commander of the Southwest Pacific, estimated American casualties would be one million men by the fall of 1946. Willoughby’s own intelligence staff considered this to be a conservative estimate.
During the summer of 1945, America had little time to prepare for such an endeavor, but top military leaders were in almost unanimous agreement that an invasion was necessary. While naval blockade and strategic bombing of Japan was considered to be useful, General MacArthur, for instance, did not believe a blockade would bring about an unconditional surrender. The advocates for invasion agreed that while a naval blockade chokes, it does not kill; and though strategic bombing might destroy cities, it leaves whole armies intact. So on May 25, 1945, the Joint Chiefs of Staff, after extensive deliberation, issued to General MacArthur, Admiral Chester Nimitz, and Army Air Force General Henry Arnold, the top secret directive to proceed with the invasion of Kyushu. The target date was after the typhoon season. President Truman approved the plans for the invasions July 24. Two days later, the United Nations issued the Potsdam Proclamation, which called upon Japan to surrender unconditionally or face total destruction.
Three days later, the Japanese governmental news agency broadcast to the world that Japan would ignore the proclamation and would refuse to surrender.

During this same period it was learned — via monitoring Japanese radio broadcasts — that Japan had closed all schools and mobilized its school children, was arming its civilian population and was fortifying caves and building underground defenses.
Operation Olympic called for a four pronged assault on Kyushu. Its purpose was to seize and control the southern one-third of that island and establish naval and air bases, to tighten the naval blockade of the home islands, to destroy units of the main Japanese army and to support the later invasion of the Tokyo Plain.
The preliminary invasion would begin October 27 when the 40th Infantry Division would land on a series of small islands west and southwest of Kyushu. At the same time, the 158th Regimental Combat Team would invade and occupy a small island 28 miles south of Kyushu. On these islands, seaplane bases would be established and radar would be set up to provide advance air warning for the invasion fleet, to serve as fighter direction centers for the carrier-based aircraft and to provide an emergency anchorage for the invasion fleet, should things not go well on the day of the invasion.

The invasion of Japan never became a reality because on August 6, 1945, an atomic bomb was exploded over Hiroshima. Three days later, a second bomb was dropped on Nagasaki. Within days the war with Japan was at a close.
Had these bombs not been dropped and had the invasion been launched as scheduled, combat casualties in Japan would have been at a minimum of the tens of thousands. Every foot of Japanese soil would have been paid for by Japanese and American lives.
One can only guess at how many civilians would have committed suicide in their homes or in futile mass military attacks. In retrospect, the 1 million American men who were to be the casualties of the invasion were instead lucky enough to survive the war.
Intelligence studies and military estimates made 50 years ago, and not latter-day speculation, clearly indicate that the battle for Japan might well have resulted in the biggest blood-bath in the history of modern warfare.
Far worse would be what might have happened to Japan as a nation and as a culture. When the invasion came, it would have come after several months of fire bombing all of the remaining Japanese cities. The cost in human life that resulted from the two atomic blasts would be small in comparison to the total number of Japanese lives that would have been lost by this aerial devastation. With American forces locked in combat in the south of Japan, little could have prevented the Soviet Union from marching into the northern half of the Japanese home islands. Japan today could be divided much like Korea and Germany.

The world was spared the cost of Operation Downfall, however, because Japan formally surrendered to the United Nations September 2, 1945, and World War II was over. The aircraft carriers, cruisers and transport ships scheduled to carry the invasion troops to Japan, ferried home American troops in a gigantic operation called Magic Carpet. In the fall of 1945, in the aftermath of the war, few people concerned themselves with the invasion plans. Following the surrender, the classified documents, maps, diagrams and appendices for Operation Downfall were packed away in boxes and eventually stored at the National Archives.
These plans that called for the invasion of Japan paint a vivid description of what might have been one of the most horrible campaigns in the history of man.

The fact that the story of the invasion of Japan is locked up in the National Archives and is not told in our history books is something for which all Americans can be thankful.